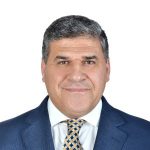 Senior member of the Advisory Board of “Program of Master of Security Studies and Information Analysis” at American University in The Emirates (AUE).

Ghoneim is a visiting scholar and regular guest speaker to;

He is a monthly article writer in the national newspapers and magazines in Egypt, and author of the book ‘Managing Defense in Democratic Society’.

During his long service in the Egyptian Armed Forces;

Locally, he occupied several command & staff jobs in fields of intelligence & information, planning & operations, training and education. His last position was Director of Planning and Operations at (strategic department level) of the Egyptian Armed Forces.

Senior National Representative of Egypt to the U.S. Central Command (Tampa, Florida).
Chief of Staff at the UN Mission in Nepal (UNMIN).
Other peacekeeping and humanitarian aids missions in Western Sahara and Rwanda.
Education;

* The Fellowship Degree has been approved as PhD equivalent of Security & Defense Studies by the Supreme Council of Universities of Egypt on 22nd of November 2015 and attested by the Egyptian Ministry of Foreign Affair on 30th of November 2015.